ABILENE, TEXAS Info and history. Abilene is in the northeast corner of Taylor County. It is situated 1,708 feet above sea level on generally flat terrain. The city is connected east-west by Interstate Highway 20 and north-south by U.S. highways 83, 84, and 277. Reflecting its beginning as a railroad townsite, Abilene is bisected by the Texas and Pacific tracks, which run east-west.

Abilene owes its genesis to the Texas and Pacific and a group of ranchers and land speculators. Before the coming of the railroad, the Abilene area had been sporadically inhabited by nomadic Indians and United States military personnel and later by buffalo hunters and ranchers. By the 1870s the Indians had been driven out, and cattlemen began to graze their herds in the area. Taylor County was organized in 1878, and Buffalo Gap was designated the county seat. When the Texas and Pacific Railway began to push westward in 1880, several ranchers and businessmen—Claiborne W. Merchant, John Merchant, John N. Simpson, John T. Berry, and S. L. Chalk—met with H. C. Whithers, the Texas and Pacific track and townsite locator, and arranged to have the railroad bypass Buffalo Gap. They agreed that the route would traverse the northern part of the county and consequently their own land, and that a new town would be established between Cedar and Big Elm creeks east of Catclaw Creek. C. W. Merchant apparently suggested the name Abilene, after the Kansas cattle town.

After the Texas and Pacific arrived at the site in January 1881 the railroad promoted Abilene as the "Future Great City of West Texas." J. Stoddard Johnston and other railroad officials platted the townsite. Several hundred people arrived in Abilene before the sale of town lots and began to establish businesses and a church. The lots were auctioned on March 15, 1881; in two days buyers purchased more than 300 lots, and Abilene was officially established. On January 2, 1883, the residents voted to incorporate, and in an election held on October 23, 1883, Abilene became the county seat. By 1890 the city had a population of 3,194; twenty years later the number of residents was 9,204.

In slightly more than 100 years Abilene developed from an almost entirely agricultural economy to a diversified economy based on oil, agriculture, commerce, light manufacturing, and service. World War II was the watershed for the city's growth and economic development. The initial and most obvious drawback to Abilene's economic development was a lack of water, since the normal annual rainfall is only 23.78 inches. The city excavated Lytle Lake (1897), Lake Abilene (1919), Lake Kirby (1927), and Lake Fort Phantom Hill (1937) to assure a municipal water supply. Local farmers were urged to diversify their crops in order to protect both themselves and processors in Abilene from losses due to weather, pests, price fluctuations, and other causes outside their control. The city began holding fairs in 1884 to promote the region's agricultural products. Severe droughts in 1909–10 and 1917–18 and the decline of farm prices in the 1920s and 1930s retarded economic growth.

Since prosperity depended also on adequate transportation, civic leaders vigorously sought additional railroad connections and succeeded when the Abilene and Northern and the Abilene and Southern railroads provided north-south connections in the early twentieth century. Efforts to attract the Santa Fe Railroad to Abilene failed. Internal transportation improved with the establishment of the Abilene Street Railway (called the Abilene Traction Company after 1919), which ran streetcar lines from 1908 to 1931. Abilene Electric Light and Power began operation in 1891; a private telephone service began in 1895. City water and electricity were combined in one firm, Abilene Light and Water Company, in 1905. West Texas Utilities was organized in 1923; the gas operations were acquired by Lone Star Gas.

The modern era began for Abilene, as for the rest of Texas, with World War II. The acquisition of Camp Barkeley, a United States Army post, in 1940 changed the demographic composition, urban landscape, leadership, and outlook of the town. One and one-half million soldiers who spent some time at Barkeley and at the air base at Tye (established in 1943) infused millions of dollars into the local economy. After World War II civic leaders aggressively sought an air force base to maintain the flow of federal dollars, and Congress approved the establishment of Dyess Air Force Base in 1952. In the early 1960s Nike and Atlas missile installations and launching sites were built near the city, but they were phased out within three years.

The oil industry, including the development of exploration, drilling, refining, and oilfield service industries, expanded significantly after World War II. Manufacturing plants increased from 111 in 1979 to 145 in 1982. Parallel expansion occurred in banking, construction, and retail and wholesale business. Service employment expanded dramatically, as it did statewide. Per capita income remained well below the state average until 1950, when figures reflected an 89 percent increase; afterward it approximated the state figure.

In 2010 Abilene had twelve commercial radio stations and one public one, four television stations, and a newspaper—the Abilene Reporter-Newsthe oldest continuously-operated business in the city. Abilene improved its municipal airport in the 1960s and has been served by major carriers and commuter lines.—

Although Abilene began its existence as a rowdy frontier town and shipping point, the citizens quickly founded schools and churches. The first class graduated from Abilene High School in 1888. Black children attended a separate school, founded by their parents in 1890, until they were incorporated into the Abilene school district. The Woodson elementary and high schools were built for black students in 1953 but were closed in 1969 in the general movement to integrate schools. A second high school, Cooper High, opened in 1960. In the early twenty first century Abilene had two school districts, Abilene Independent School District and Wylie Independent School District. Wylie ISD included elementary, middle, and high schools. Abilene ISD had five high schools, including a medical magnet program, as well as four middle schools and fifteen elementary schools. Early in the twentieth century private schools were established; the longest-lived of these was St. Joseph's Academy, founded by the Sisters of Divine Providence in 1916. St. Joseph's (later called Central Catholic) educated hundreds of students before it closed in the 1960s. The Episcopal Church opened St. John's School in 1950. Abilene sought and acquired a Baptist college, Simmons College (now Hardin-Simmons University), in 1891. Abilene Christian College (now Abilene Christian University) first opened as Childers Classical Institute in 1906. McMurry College (now McMurry University), a Methodist school, opened in 1923. Cisco Junior College began offering courses in Abilene in the 1970s. In 2010 Abilene also had the Texas Tech University Health Sciences Center and Texas State Technical College West Texas.

The dominant religious groups in Abilene have been Baptist, Church of Christ, and Methodist; Presbyterians, Lutherans, Episcopalians, Disciples of Christ, and Catholics have been present in smaller numbers. From the beginning, there was an attempt to tame the frontier and make Abilene a town congenial for rearing families. The initial efforts to abolish saloons were successful in 1903; the city was legally dry until 1978, when a fiercely contested election to legalize the sale of alcoholic beverages barely succeeded. Abilene had already been bracketed by two wet communities—Impact and Buffalo Gap—since the 1960s. Until the 1930s virtually all local charity was conducted by the churches; they sponsored and funded day-care centers and nurseries and programs for elderly citizens, civic improvement, disadvantaged youth, and disaster relief. For decades churches provided the principal arena for women's community involvement. This religious environment has been reinforced by the presence of the three church-related colleges. By the early twenty first century there were more than 100 churches in the city.

Cultural interests are reflected in the profusion of dramatic clubs, Chautauqua circles, community bands, and literary guilds. The first social and cultural organization for women was founded in 1883; the City Federation of Women's Clubs dates from 1898. The women's clubs were successful in establishing the Carnegie Library, which opened in 1909. The original building served the city until the 1950s, when it was razed to make way for a new library building. In the 1960s citizens approved bonds for the construction of the Abilene Civic Center and the Taylor County Coliseum. The Abilene Philharmonic Orchestra gave its first concert in 1950. Active little-theater groups, ballet companies, a civic chorus, an art museum, a community band, and an opera association support the fine arts.

In the 1930s Abilenians enjoyed polo and horse and auto racing at Fair Park. In 1946 individuals invested money to fund a professional baseball team, the Abilene Blue Sox. The club, an affiliate of the Brooklyn Dodgers, boasted a .708 winning percentage in 1946. The Blue Sox operated until 1957. In 1981 the LaJet Classic at Fairway Oaks Golf and Racquet Club was added to the PGA tour. Popular recreation areas near Abilene are Fort Phantom Hill Reservoir and Abilene State Park. Abilene has public swimming pools, art galleries, a zoo, and numerous city parks. The West Texas Fair & Rodeo attracts large crowds to the city annually.

At its incorporation Abilene adopted a mayoral form of government and elected Dan B. Corley first mayor. In 1911 the city changed to a home-rule charter that provided for a mayor, four commissioners, and several city offices. Since 1947 it has had a city-manager form of government. For the last several decades Abilenians have generally favored Republican candidates in national elections.

In 1959 Abilene made extensive improvements to the downtown area. But major population movement in the 1970s and 1980s, spurred by the location of Cooper High School, the Mall of Abilene, and Fairway Oaks, was south toward Buffalo Gap. Most commercial establishments left downtown Abilene. The ruins of Fort Phantom Hill, north of Abilene, and Buffalo Gap Historic Village, south of the city, are the major historic sites nearby. Abilene also offers a variety of art and history museums, including The Grace Museum, Frontier Texas!, the National Center for Children’s Illustrated Literature, and the 12th Armored Division Memorial Museum.

We are a Christian based Auto Dealership in Abilene, Texas in the heart of the Big Country. With the Historical Down Town Abilene to our north about 1 mile away. We are approaching our 14th year in the business of providing the United States with the highest level of customer service and satisfaction. Since 1998 our dedicated staff have been providing the same great service to our national and international customers through our online storefront.

Freedom Motors, deals almost exclusively in new car trade-ins and Lease Vehicles. These are lease returns, Bank repossessions, corporate fleet cars and distressed Liquidation units from various bank & financial institutions.These vehicles are usually one owner. The biggest advantage is the price! Our customers have enjoyed huge discounts as much as 35% below book value. Over the years we’ve sold thousands of pre-owned vehicles all makes and models. We can say with enthusiasm that our quality pre-owned vehicles have given excellent service to their new owners as well as the best value for their money.

With over 80 years combined experience in automobile sales and remarketing. Getting you in your new car, truck, or SUV is now easier then ever. If you’re looking for peace of mind, we offer Extended Warranties that can help secure and protect your investment.

At Freedom Motors we sell more than just cars; we offer the added value and quality that makes our dealership different from the rest. We want your experience here to be the best it can possibly be and we’ll do whatever it takes to make it that way. We are committed to providing an excellent internet experience that keeps you coming back again and again.

We want to be your lifelong source for all your automobile needs. 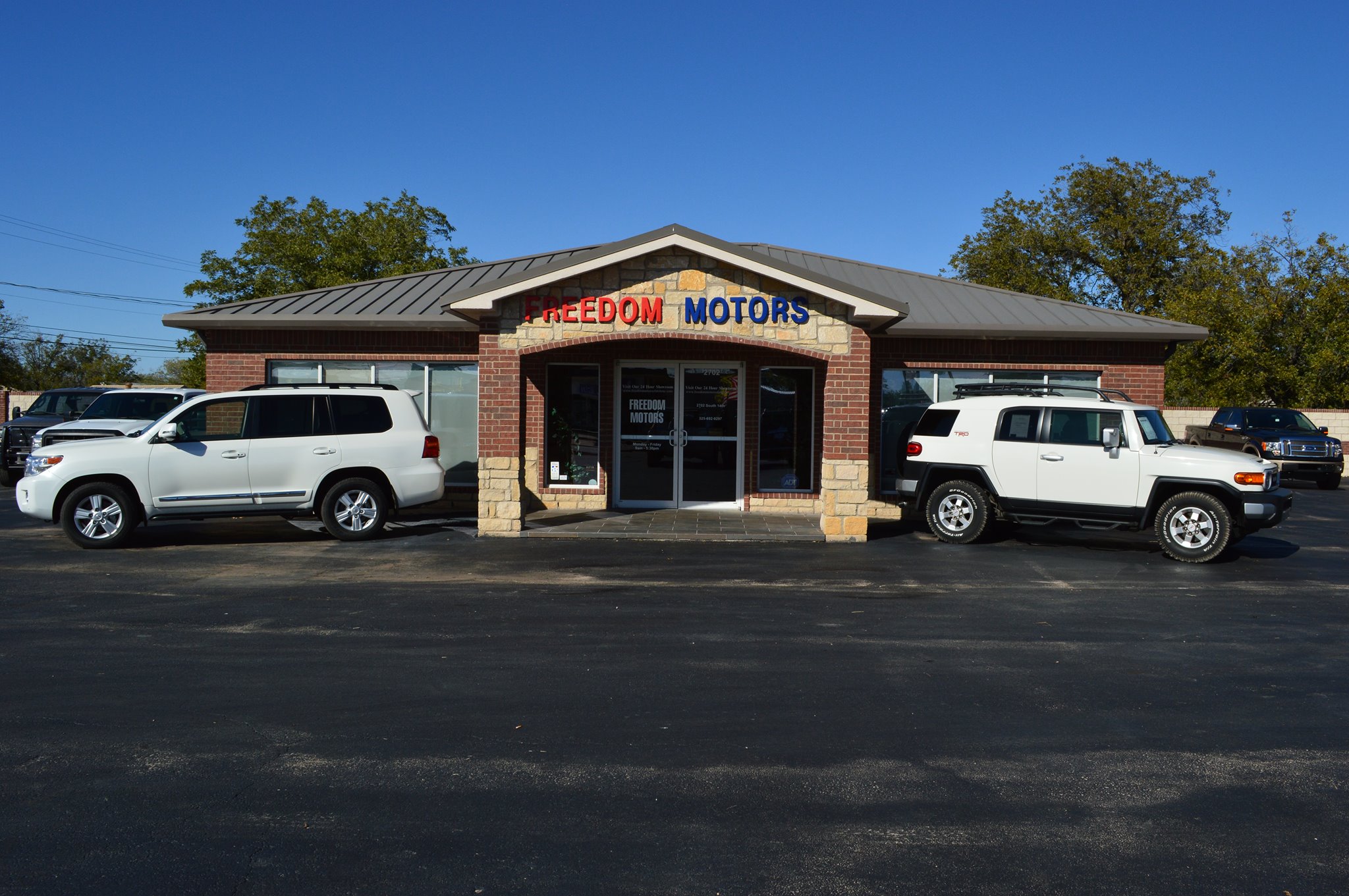